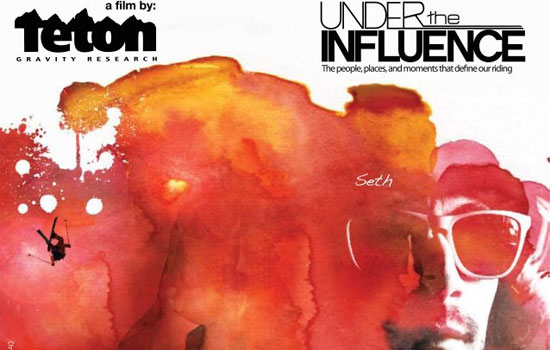 Support The Snow with UBCO!

The University of British Columbia Varsity Outdoors Club Okanagan is proud to present a Teton Gravity Research (TGR) film production “Under the Influence” on October 29, 2008 at the Kelowna Community Theater!

Comprised of professional and well-recognized cinematographers, producers, directors and athletes, TGR has broken ground on all levels of modern action-film footage. TGR will expose viewers to the most sought-after ski and snowboard destinations around the world, leaving you wanting more powder and adrenaline than ever before! “Under the Influence” captures the talents of Jeremy Jones, Seth Morrison and B.C’s own Kye Petersen, Victoria Jealouse and friends, as they shred big-mountain and park terrain. Since 1996, TGR’s annual ski and snowboard films have been premiered and sold out in over 150 locations around the world, including North America, Japan, and Europe, with a total of 18 international acclaimed and award-winning films. UBCO is fueled up and ready to bring in the most desired and epic ski and snowboard film of the season, right to your doorstep! We, the UBCO Varsity Outdoors Club Okanagan (VOCO), are hosting the one and only premier of this film within the entire Okanagan Valley. We have $4500 worth of prizes to give away, including day-passes to Revelstoke Mountain Resort, a long board, some new Burton snowboard bindings, a free weekend of Cat-skiing and much more! Your name could also be drawn and entered into the national draw to win a free Heli-ski trip in Alaska!

This event is a fundraiser for the Varsity Outdoors Club at UBCO, and will use all proceeds towards new club gear, safety training (avalanche and first aid courses, ect), and group trips through out the year. Bring friends and family out for an evening of fun and prizes, as we celebrate and welcome the 2008/09 winter season!

Your support is appreciated!

TICKET SALES: You can purchase tickets from the booths we will have set up on campus in the next two weeks, or at the following locations: Island Snow, Venture Gear, Kelowna Kayak and Outdoors, Fresh Air Experience, Deviate Board Shop, and Freeride Board Shop. Also tickets can be purchases at the UBCO used book store on campus.

Get your tickets soon; they are going fast!!

We are working right now to launch the web site. From time to time you may see it appear and disappear. Please bear with us as we need to do some live testing and make some changes. This may go on for a day or so as we work out the bugs. Thanks for your…

Music BC presents The Habitat’s Local Showcase! Ticket Options: Buy tix online at www.thehabitat.ca for $6.50 Buy tix from Caitlin Weaver for $5.00 – just message me on Facebook Risk buying one at the door for $5.00 and hope its not sold out. Doors open at 8pm and the show starts at 8:30pm. Check it…

Holly and other local artists will be showcased at the Lake Country Art Gallery. (Read Holly’s bio below) The new Lake Country art gallery, which opened its doors in January 2010, will officially open its second show “Sculpture Partners with Abstract” on Sunday, March 21st. Visitors can see the show as soon as March 18th…

PRESS RELEASE PUNKSVILLE (The Movie) to be produced in Kelowna Producers of the Okanagan-based film and TV production company, Death or Glory Productions, are extremely pleased to announce their new film project, PUNKSVILLE, a full-length motion picture to be filmed entirely in the Kelowna area. Currently in pre-production, filming is set to begin in early…

This fund raising event is focusing on featuring a select few of phenomenal young artist performers, some of whom have performance experience with the VSO and the OSO. The top young artist performers of B.C. are “standing ovation calibre”, some with national & international experience. Okanagan Valley talents are– Alicia & Colleen Venables – piano…